Increasing global viewership, a jet-set following and high-performance technology have quickly made Formula 1 the primary focus for eyewear companies investing in sports sponsorship.

Last week’s news that Safilo, who left Formula One just a year ago, is back in the game with the signing of a deal between his Blenders brand and Oracle Red Bull Racing – this year’s top F1 team – is one further proof of the sport’s enthusiasm for eyewear.

While the category has historically invested in F1, it appears to be picking up the pace following the success of Netflix docu-series Drive to Survive, which chronicles the behind-the-scenes drama at the circuit.

F1 offers companies a unique blend – a global audience and luxury positioning on par with tennis, a European heritage that resonates with many Italian eyewear executives, and a long-term presence that now extends beyond F1’s racing season thanks to Netflix.

“Formula 1 is a big platform in terms of visibility – you have 2.5 billion people around the world [who watch it]. F1 drivers are very vocal about wearing glasses as are the teams around the drivers like engineers and technicians who always wear glasses for protection. Glasses are part of the dress code and the look, so it’s very natural,” said Matteo Blandi, Marcolin’s Group Marketing Director.

“Compared to other sports, the audience is very, very large. F1 used to be more focused on specific countries but is getting broader. It’s quite unique in terms of fashion – it’s a rich sport, so you have the opportunity to present yourself at races and be part of a catwalk of sorts. When you walk, you really feel it. As Ray-Ban is a fashion accessory, this is the right place for us,” said Francesco Liut, EssilorLuxottica Global Chief Marketing Officer.

The story goes on

All of the eyewear companies that have spoken to WWD appear to have similar sponsorship clauses. This includes a team’s drivers, engineers and workshop staff, as well as key personnel who wear the sponsor’s goggles on all official engagements and on-site at race venues. A company’s logo is often displayed on driver’s helmets or racing suits, drivers appear in promotional images for the brands, and often collaborate with brands on special limited-edition products.

Last week, Ray-Ban released a limited edition in collaboration with Scuderia Ferrari to celebrate Ferrari’s 75th anniversary race at its home track of Monza. The carbon fiber wayfarer collection sold out immediately upon release and caused a stir when team riders Carlos Sainz Jr. and Charles LeClerc made a surprise in-store appearance.

Ferrari, one of the top teams this year, also boasts two of the sport’s most popular drivers, helping to further develop Ray-Ban’s F1 association. The company signed with the team in 2016.

“The beauty of these two drivers is that they are fresh and young. Ferrari can showcase our products on them via social media. The team and the sport as a whole are more relatable now, it’s not about the pilots feeling inaccessible and far away,” said Liut. 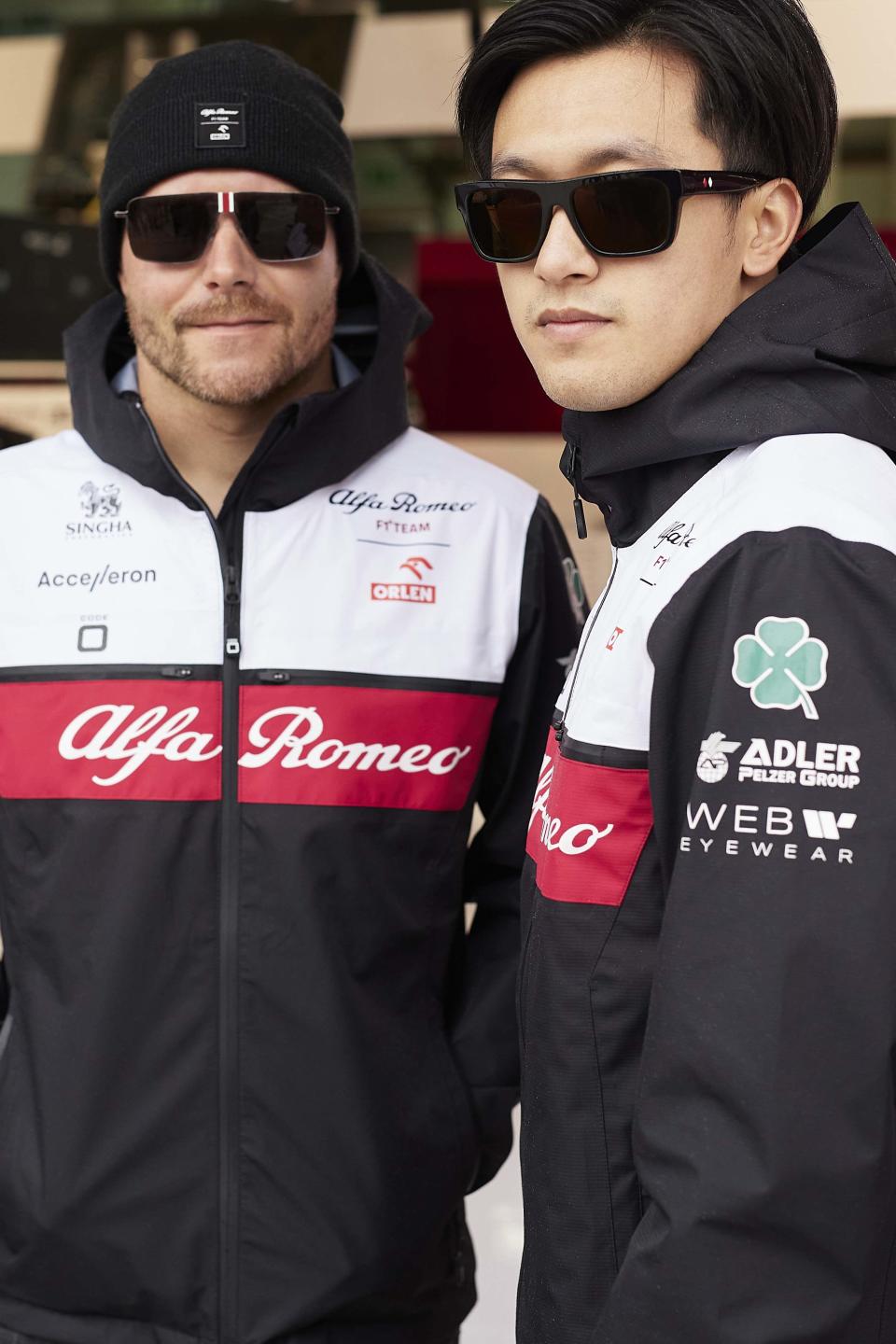 “This sport has so much appeal now and we’re trying to work more and more with them, not just on sunglasses but optical products as well. Eye care is becoming an increasingly important part of the Ray-Ban business and the Ferrari excitement will help us reach a younger audience,” he added.

While Ferrari is one of Formula 1’s biggest teams (and probably has some of the highest sponsorship fees, though Liut declined to comment on that), even smaller teams are signing eyewear sponsorship deals that pack a punch.

In 2021, Maui Jim signed on as the official eyewear partner of Haas – the only US-based F1 team known for its gritty approach to the racetrack. Team boss Günther Steiner has also emerged as one of the most popular characters in Drive to Survive.

“This sport is growing, and with every growing sport the price tags match,” said Martijn van Eerde, Maui Jim’s senior director of marketing, but declined to elaborate further. “F1 isn’t necessarily the cheapest sport, but it arguably suits Maui Jim best. It is the ultimate marriage of athletics, performance and technology, and goes hand-in-hand with the relentless pursuit of perfection. That’s what we identify with at Maui Jim.”

Like other executives interviewed, van Eerde said that Maui Jim’s functionality made it easy to integrate with the Haas paddock. “It started with the engineers – they’ve been drawn to our brand from day one,” he said.

For the 2022 season, Safilo has decided not to re-sign his Carrera sponsorship with the Alfa Romeo team and instead sign the brand with Ducati bikes. But rival Marcolin saw it as an opportunity.

Marcolin quickly stepped in to sponsor the Alfa Romeo team with its Web Eyewear brand, which is in the process of being rebranded. It saw synergies with Alfa Romeo, which was also undergoing a restructuring of its own. The team revised its driver roster this season, signing Mercedes-AMG veteran Valtteri Bottas and rookie and first Chinese F1 driver Zhou Guanyu. 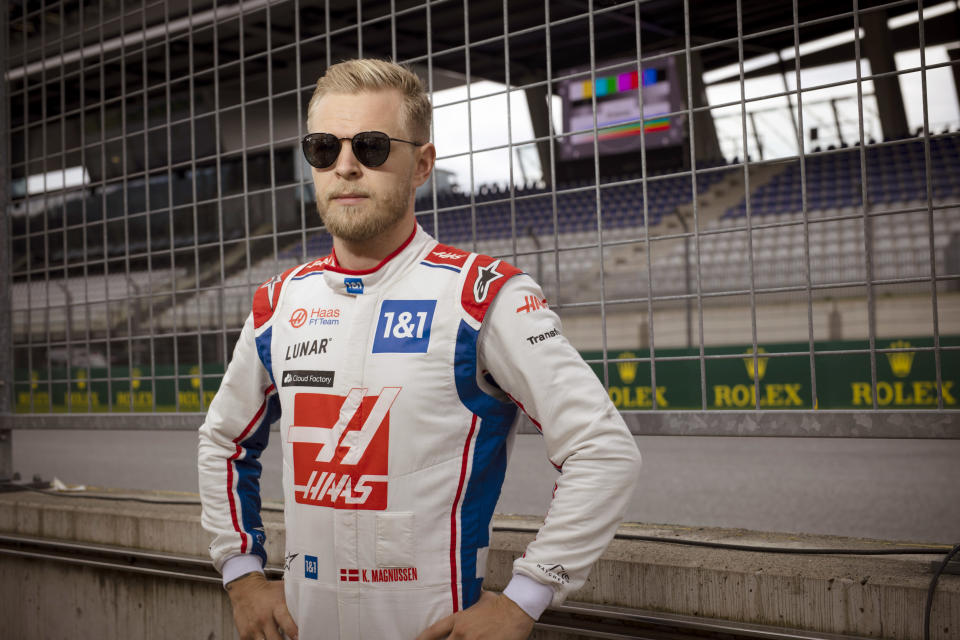 Speaking on the attractiveness of the team, Blandi said: “Alfa Romeo has chosen a really famous driver, Valteri Bottas, and on the other hand you have Zhou, who as the first Chinese driver is also very valuable. The marketing opportunity was very 360 degrees. We even did some special activities with Zhou in China.”

As Web looks to rebrand and gain market share, Blandi said: “We need awareness at this moment and F1 is at the forefront. We didn’t choose any other sport because the fans and enthusiasts of Formula 1 are unlike any other sport – not even football. It is a global platform with maximum visibility.”

While Safilo retired from Formula 1, his absence was short-lived. The company last week signed a deal between its Blenders Eyewear brand, which is undergoing a rebrand, and Oracle Red Bull Racing. The team is poised to offer Blenders high visibility in markets outside of the US, especially as they are likely to win this year’s Constructors’ Championship as well as the World Drivers’ Championship with team member Max Verstappen. His teammate Sergio “Checo” Perez is also a popular driver with a large following in his native Mexico as well as throughout Latin America.

Global Chief Executive Officer Angelo Trocchia said it’s about finding the right team for the right brand. For Carrera, “Formula 1 wasn’t the right terrain and it was better to invest the money at Ducati. Blenders is a different brand – it’s younger and sportier. It was the perfect positioning to stand alongside Red Bull,” he said.

The partnership has already started and will be expanded next season with limited editions. “It’s the best combination you can have at this moment,” said Trocchia. “Instagram is already full of the Red Bull team wearing Blenders. It’s perfect. We will be on the helmet this year and by March 2023 we will have a specific collection. It will be an incredible boost.”

While visibility seems to be key to the F1’s impact on eyewear, it does have its limitations. As part of their contracts, companies grant Netflix and Teams full permission to use their logo in footage and promotional imagery without defacing the logo.

But that doesn’t mean the brands are guaranteed anything on the show. “If you look at the pitch decks [from teams], Netflix is ​​not in it. Nobody can guarantee you that you will have time on the show or what will be aired,” van Eerde said. “It’s about finding the right frequencies and aligning with the right team that will offer you the most value.”