Twenty-one years ago this week, police officers, firefighters, paramedics, and volunteers converged on the remains of the World Trade Center (WTC) towers to sort through the rubble. In the wake of an unprecedented tragedy, heroes stepped forward to help their neighbors and their city.

The cleanup efforts at ground zero would continue for months. The City of New York estimates that over 91,000 individuals assisted in total, all of whom were exposed to the toxic mixture of dust, smoke, and chemicals arising from the wreckage. As the responders managed the psychological effects of their work, new questions arose. What would the time spent at ground zero mean for their physical health in the coming years?

In 2011, as part of the James Zadroga 9/11 Health and Compensation Act of 2010, the U.S. Centers for Disease Control (CDC) launched the World Trade Center Health Program—a commitment to provide free medical care for 9/11-related conditions to all responders and survivors through the year 2090. The program also coordinates and funds research related to the health impacts of 9/11.

Research has shown that the particular mixture of building dust, smoke, and jet fuel at ground zero contained carcinogens that may increase responders’ cancer risk for decades to come. The centralized data from the WTC Health Program facilitate long-term studies of such diseases, giving researchers insights into the unique challenges responders may face as they age.

A recent meta-analysis in the Journal of the National Cancer Institute (JNCI) evaluated cancer incidence in three large cohorts of WTC responders, totaling 69,102 individuals. Cancers with the highest risk relative to the general population included melanoma, thyroid cancer, and prostate cancer. Other analyses have suggested an increased incidence of blood cancers, such as leukemia and lymphoma.

The meta-analysis from JNCI identified a 19 percent higher risk of prostate cancer in WTC responders as compared with the general population. Research on this association dates back to 2012, when a study in the Journal of the American Medical Association identified prostate cancer as one of three cancers with an increased prevalence among WTC rescue and recovery workers. In the 10 years since, scientists have attempted to decipher the mechanisms underlying this association.

In 2018, a study in Molecular Cancer Research, a journal of the American Association for Cancer Research (AACR), suggested that interactions with the immune system may play a role. Compared with control samples, the tumors of WTC responders showed a significant upregulation of genes involved in DNA repair, cell cycle arrest, and glycolytic metabolism. Researchers also observed increased markers of natural killer cells and Th17 cells, a type of helper T cell associated with inflammation.

Data from human tumor samples and mouse models show an increase in pro-inflammatory immune cells and cytokines in the prostate following exposure to WTC dust.

These data reveal an association between WTC dust exposure and an altered prostate immune microenvironment, but can the dust directly promote carcinogenesis? A 2022 study published in Cancer Research Communications, a journal of the AACR, evaluated this relationship using a mouse model with a prostate-specific deficiency of the tumor suppressor PTEN.

In the study, the researchers found that PTEN-deficient mice exposed to WTC dust developed a significantly larger tumor burden marked by increased markers of proliferation compared with mice given a control solution. Further, prostates from dust-exposed mice with a PTEN deficiency showed higher activation of the oncogenic PI3K signaling pathway.

The researchers also investigated systemic effects of WTC dust exposure that might play a role in prostate cancer development. While they confirmed that dust fibers did not circulate to the prostates of exposed mice, they observed a small increase in prostate concentrations of certain epitopes of the heavy metals titanium, vanadium, and antimony in dust-exposed mice.

They also noted increased concentrations of inflammatory cytokines—including the tumor-promoting cytokine IL-6—in the peripheral blood. These data suggest that the WTC dust can elicit systemic changes that may promote prostate tumorigenesis.

After the association was first noticed, many WTC responders began receiving regular—sometimes annual—screening for thyroid cancer. Thyroid cancer is rarely fatal, with a five-year survival rate over 98 percent in the U.S., and it often grows less aggressively than other cancer types. In some individuals, especially older adults, an early-stage thyroid tumor may never cause symptoms and could remain undetected for the rest of their life.

Proponents of the surveillance bias hypothesis suggest that the thyroid cancer incidence rate is higher in WTC responders because they receive more frequent screening than the general population. Proponents of the association bias hypothesis suggest that the doctors evaluating a suspicious thyroid nodule may be more likely to deem it malignant than benign if they know their patient is a WTC responder. 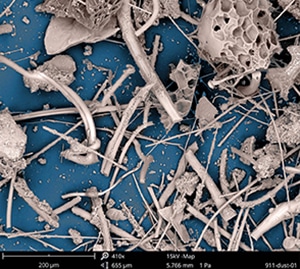 An electron micrograph of dust particles recovered during the aftermath of 9/11. Photograph courtesy of the Health Effects Laboratory Division of the National Institute of Occupational Safety and Health (NIOSH) and the WTC Health Program.

A pair of studies in the International Journal of Environmental Research and Public Health, using the same cohort of thyroid cancer cases from the WTC Health program, provided evidence that bias may not play a significant role in the increased risk of thyroid cancer in WTC responders. The authors of one study found that thyroid tumor size and age at diagnosis were not significantly different between WTC responders and individuals from the general population, while WTC responders would be expected to have smaller tumors diagnosed at an earlier age if they were discovered due to surveillance bias. Further, 61.8 percent of surveyed WTC responders said that their thyroid cancer was discovered because of symptoms rather than routine screening.

While these studies are small, they suggest that bias cannot fully account for the increased incidence of thyroid cancer in WTC responders. More research will be necessary to evaluate the molecular mechanisms underlying thyroid cancer risk in this population in order to optimize screening and treatment strategies.

Although the meta-analysis from JNCI did not find an increased risk of blood cancers such as leukemia and lymphoma among WTC responders, the topic is still under debate. A large analysis published in JNCI Cancer Spectrum in 2020 found that WTC responders were 41 percent more likely to develop leukemia than other individuals in their geographic area, based on publicly available incidence data standardized for age, sex, race, ethnicity, and year of diagnosis.

More time may be necessary to fully understand the links between cancer and WTC response, and scientists are uncovering new clues about what may come. In a recent study in Nature, researchers found higher rates of clonal hematopoiesis in WTC responders compared with a control group of first responders.

Clonal hematopoiesis is the clonal expansion of blood cells that have acquired mutations, often in genes related to cancer development. It is associated with an increased risk of hematological cancers and is considered a precursor condition for diseases like leukemia and lymphoma.

The most commonly mutated genes among both the WTC and control cohorts were DNMT3A and TET2, both of which are associated with myeloid-derived cancers.

While longer follow-ups and larger studies will be necessary to understand how clonal hematopoiesis impacts cancer risk specifically in WTC responders, studies like these set the stage for future research that could inform new screening, prevention, and treatment options.

For more information about how the 9/11 attacks continue to affect the health of responders and survivors, check out Health Effects of 9/11: An Online Exhibition, curated by the WTC Health Program. If you or a loved one identify as a 9/11 survivor or responder, learn more about the WTC Health Program here to determine if you may be eligible for care.